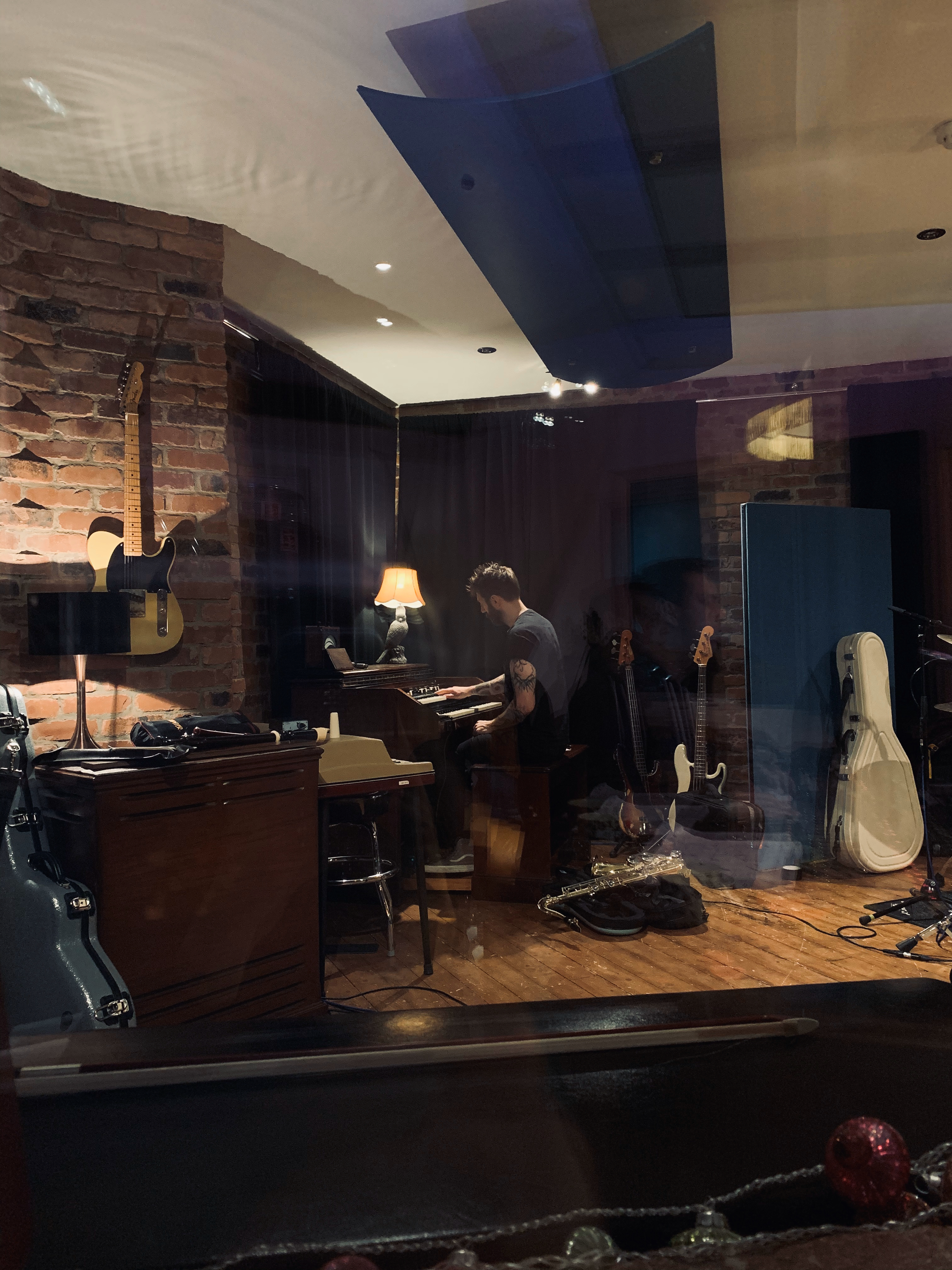 Disastrous news: I left my camera at the studio, so you’ll just have to have the two iPhone photographs, then I’ll tell you about today and share all the pictures tomorrow in one go. Sorry!

So lead vocals were all done, nearly. We’ll finish that tomorrow. We started today with bowed bass guitar. Ever done that? It really rumbles, digs in, bites your hand off. You can feel it as well as hear it. Then I bowed some cymbals which are a distant scream, we chose a large Istanbul one that sounded particularly screamy.

What then? It’s hard to remember without the photos. Josienne sung some backing vocals. It’s hard for anyone to sing in tune & time with me, my delivery is rough as a butchers dog, so she really had to work for her pay for that, thankfully she’s a field tested professional thats performed better in more challenging scenarios. She’s doing these distant echoing angelic harmonics, not taking over. You have to be careful how many vocals you give to her in case every review says “shame that bird with the great voice doesn’t sing more” which it probably will anyway, but hey ho. She did a lovely thing where she screamed into the strings of a piano, that made some truly beautiful noises & we used them on a song.

Then it was time to breathe. Josienne played saxophone on a song called ‘A Ditch Worth Dying For’ and then again on a tune called ‘Leaves’. She then piled on clarinet & a few recorders, she built an entire orchestra section out of just herself. She had this concept for a kind of patchwork Steve Reich-esque collage of sound built across takes and was kind of worried it might be hard to realise. Turns out, she just did it one go. It’s a pleasure to watch her work, a rare combination of talent, judgement & hard work. I can’t recommend her highly enough if you’d like a producer to bring a little eloquence & grace to your project.

Next, I played Andy’s old Hammond C3 with it’s spinning speaker containing Leslie cabinet. It was an ambition of mine when I started this project to get to sit at this stool and play this beast. It’s stunningly loud, so powerful. A mammoth, a mountain of music. You wouldn’t believe it in the room. This is religion in a box. You couldn’t not believe anyone singing along with this instrument. It takes so much maintenance, it’s so complex with so many strange and rare and intricate parts, it’s a rare & precious piece of work that rewards the effort with its rich & deep tones & tactile keyboard that no modern machine can match.

Tomorrow, we have a handful of vocal takes to work through, then the rest of the day is for dirty Rhodes, a very exciting special guest superstar musician is joining us, someone I am flattered would even consider bothering to make the train journey from London to take part in my project. I’ll tell you who tomorrow, but in the meantime, any guesses?

Also, I’ll remember to bring my camera home so you can see all this 🙂

Hope you’re all having as much scary fun as we are.