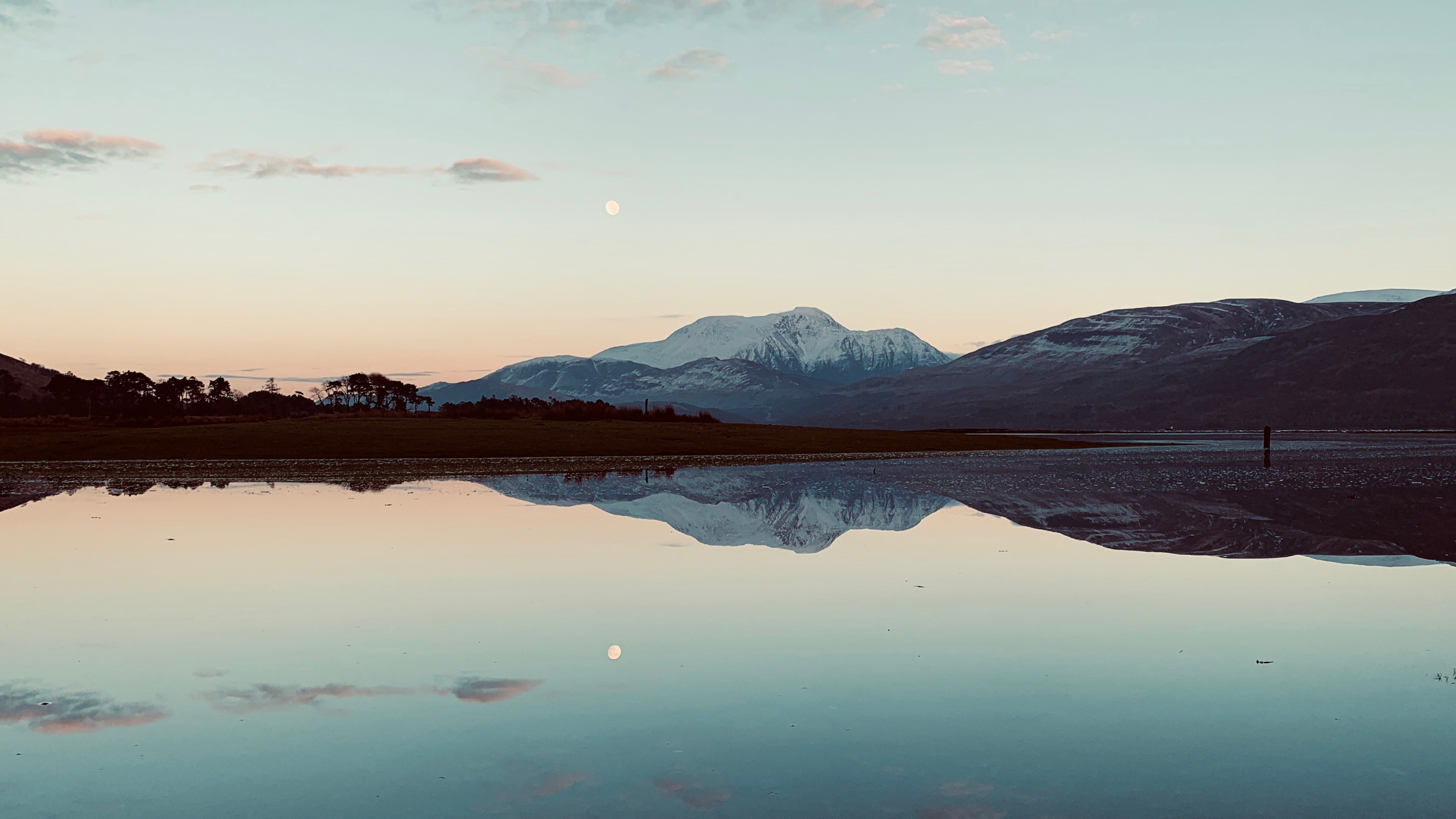 I spent a week in January 2019 exploring the hypnotic topography that surrounds Watercolour Music, an exceptional recording studio nestled in a perfect location among the valleys & rivers near Fort William at the foot of the majestic Ben Nevis.

Rough Trade Records artist Josienne Clarke had assembled a band of musicians to hone her latest solo LP ‘In All Weather’ and I tagged along, documenting proceedings through my lens.

Since I wasn’t performing on the record, I had plenty of time to wander the breath-taking landscape surrounding the facility. I took these long, wide, colourful & sweeping photographs of the mountains, lakes & hills alongside close-up shots of the objects I found inside the studio. The connection between these sharply contrasting viewpoints seemed an integral part of the way the music was made.

I felt privileged to witness an artist of Josienne’s calibre create her craft and a strange, unexpected sense of isolation, of being apart from things in a way I could not really understand. I had a powerful compulsion to express that in the only way I knew how, and this set of photographs is my attempt to justify my own presence in such a heady, inspiring & intimidating atmosphere. I left better than arrived, having discovered that everyone was a part of this, in their own way. I learned how to be kinder to myself, how to give myself credit for what I was rather than punish myself for what I might never be. This is a still from the video diary I shot that week, that became the video for the first single from Josienne’s LP, ‘If I Didn’t Mind’. You can read her discussion about the meaning of that song here and I recommend you do so. It’s a harrowing but incredibly important read.

Josienne had a direct line of sight to the summit as she performed the vocal, guitar, recorder & saxophone parts on the record, isolated in a sound-proofed room, alone yet connected to the landscape in ways I could never explain. To see her wrestle with her incisive, emotional lyrics as she stared out of the window at the mountain was a powerful thing that my video for her song tried to capture. Or maybe, she was looking at me, all weather clad against the cold. Or perhaps she had seen one of the many wild animals that roam the sparse landscape around the studio. I felt, at the time, that it made little difference – I was all of those things, too. It’s funny how quickly one becomes nothing but a wild roaming animal or a part of the scenery.

These foam spikes, attached all over the walls & hallways of Watercolour Music, are part of keeping the sound on the inside in, and perhaps some of the outside out. They worked well for Sonny Johns, the bass player & co-producer; he can hear all the better what notes he should play, how hard & for how long. I also feel they also work the other way around, too – they protect the pristine forest & lakes from the intensity of the music. Absorb some of it, lessen it, soften it. If you hear the album, you might need some of that for yourself.

Elliot Galvin, famed jazz pianist, struck chords on the copper strings of the baby grand with those same mountains right in his eye-line. Listen carefully and I think you’ll hear the distant majesty of the ice, snow & altitude in the notes he conjured with his hands. You can see the hammered brass of one of Dave Hamblett’s cymbals and the torn cloth & rusted screws inside a harmonium. Mary Ann Kennedy played the harp on the record but I didn’t take any photographs of that. I was too busy listening.

The sense of scale felt all out of kilter with reality that week. I felt both incredibly grounded, examining every life decision I had made up until the point that led me to that room at that time, and untethered, free to roam this wild & vast land, miles from anywhere, just another wild white hare. Either too close or too far away. It was beautiful & it was sickening & I wasn’t expecting that dissonance. I’m not sure I always coped well, but in retrospect, I think that anyone would be the same, with the microscope of sound & self-examination that such an environment fosters. It’s hard not to disappear, seasick, down a hole, and everyone but the properly grownup kids do it. This is an underpass at Fort William that leads from the wild to that strange distant town. The lights a landing strip on some island of lonely familiarity.

This next photograph was a favourite vantage point of mine, that week. Away from the proximity to lifetimes devoted to being the very best musician a human being could ever be, close but no cigar to every dream of mine. I just have to have different dreams, or work harder. And I knew the folks the other side of the wall feel the same; it’s really not a grand prize. Being a professional musician is, in many ways, a total shit sandwich. It’s a human way to be, never satisfied, always filled with regret, greener grasses behind unscalable fences. Maybe the most important lesson I learned that week was not to take that out on others & to show the resolve to change it rather than wallow. That hurt was mine. Nobody did this to me but me. I can change it, if I want to. I can be anything I want and so can you. Just make you’re a maker. I wasn’t, then, but I am now. And I’d like to thank Josienne for helping me find that strength. This is the view at the place that I started to realise that she was right.

Here’s the video I made that week. I shot it on an iPhone, an old Canon DSLR & an old military rangefinder. If you look, in some scenes, you can see the scale in the glass of the viewer. It’s not mine, it belonged to Nick, the engineer on the record & he left it lying around so I played around with it. I hope it gives a flavour of what it was like to be there, in that room & outside of it, with those musicians. A rare thing that I will never be grateful enough for & I just hope what I made goes someway towards letting other people peek in, too.

The album comes out on the 8th November 2019. You can pre-order it here.

I hope you enjoy the album, the video, my photographs & this piece of writing about all of it. Thanks for reading. Here’s the last photograph I took at Watercolour Music in January 2019. Look carefully and you’ll see a tiny seabird, all part of the same landscape as the rest of us.