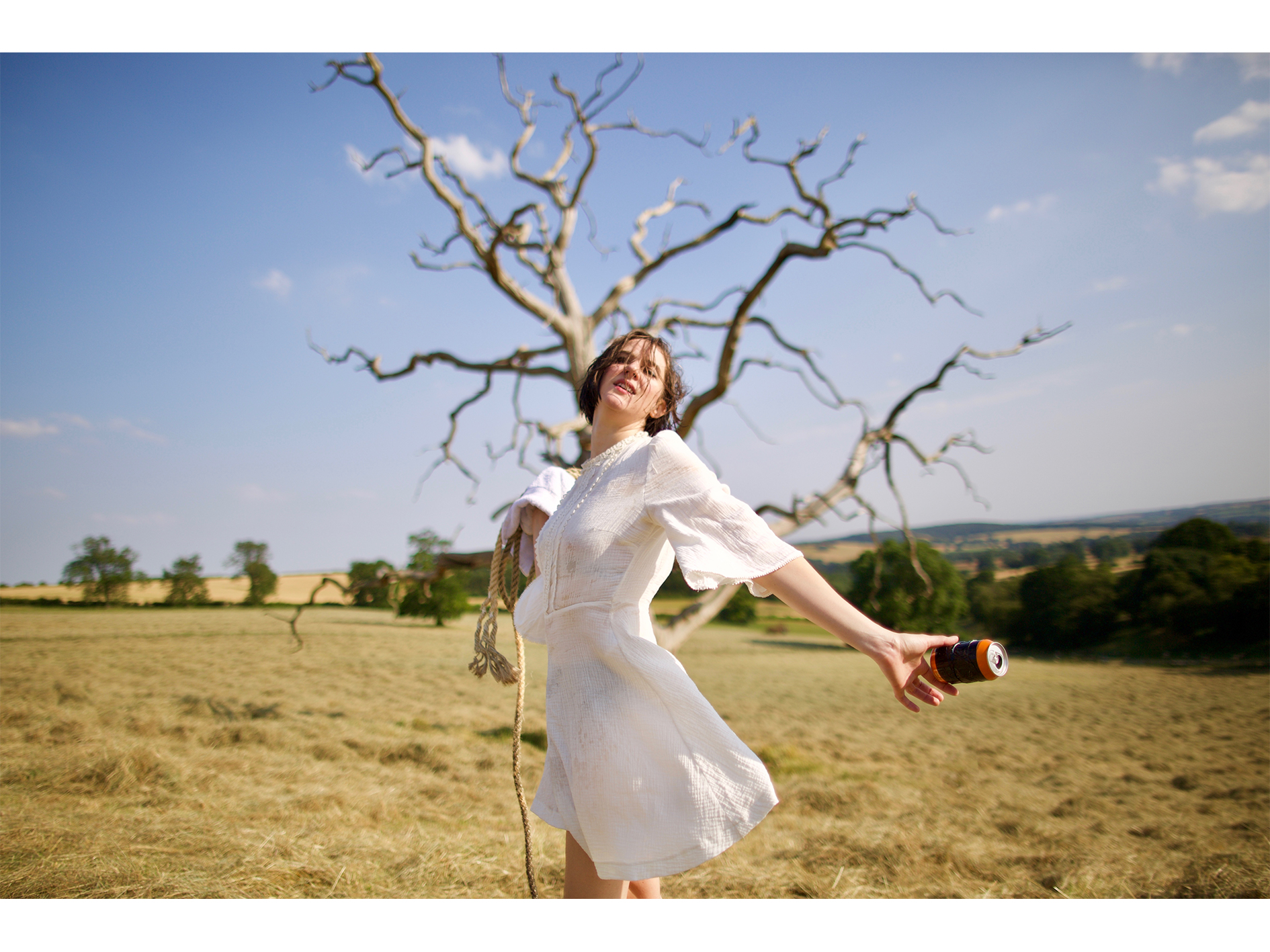 My latest video production was released into the world yesterday.

This one is for the new Josienne Clarke single, ‘Slender, Sad & Sentimental’ on Rough Trade Records. It’s a lurid & fun play on the self-referentiality in Josienne’s song. We see her in a series of strange scenarios, in each one, she’s watching herself in the others, reacting to what she sees. It was great fun to plan, film & edit. We still have the clouds, hanging up in our little house.

Those are the two pictures that the record company used to trail the video. The first was a shot of Josienne I took with the lightning tree and the second is a still from one of the scenarios. The song sort of explains why she’s sat in a crows nest that we made out of a builders rubble tub, cardboard & cotton wool.

Did you realise that the tree scene was a reference to a previous video of Josienne’s? Things go pretty wrong in the Fire & Fortune video. Thankfully, this time, all these years later, she has a fire extinguisher & a nice can of fizzy pop to cool her down! Things are looking up!

Here’s a gallery of the other stills from the video that I suggested could be used for the thumbnail. In the end, Rough Trade went with the crows nest. I think that was the right decision. Which one is your favourite?

We planned this for a couple of months, sketching out scenarios in pencil & paper, fleshing out the various scenarios and how they would relate to each other. My original concept was for us to see through Josi’s eye down the telescope, looking at herself from one place to another. I painted in a psychedelic kaleidoscope inside a toilet roll, and it’s the same telescope, but I couldn’t get it to look right under all the lighting conditions we would face, so in the end, you’ll just have to imagine what that would have looked like.

Interestingly, and this has been the subject of a furore of discussion on social media, it isn’t a toilet roll at all, despite my vast collection of those. I had been collecting them for this purpose, and now have hundreds, but it turned out that a standard Andrex size one was too short & a kitchen roll size one was too long to do the trick of the light I was aiming for. So, I purchased a card tube from hobbycraft that was just the right length. It was also slightly narrower & slightly heavier card. I know, you’re going to say, I could have cut one down. I tried that, but it messes with the integrity of the tube and anything that did that meant the paint didn’t look right. I had to cut it open to paint inside, and the eagle-eyed among you will have noticed the join, fixed with duct tape. That was all part of why I could never get that shot to work. So, that’s the fascinating backstory of the card tube telescope.

Here’s the speech bubble from the ‘poet’ scene. Josi wrote it in sharpie & we still have it. It has all the lyrics to the song on. It’s still here, but I tore it a bit, taking it down at the end of the day.

It took a week of making the props & getting the right colour backdrops, cakes, balloons, etc, then we shot it in a day & a half in a village hall. We had two days planned, but thanks to careful planning & slick execution, it went almost perfectly & we finished early.

Here’s the video! This is the part of the article where you have read enough of my words that you get to watch it!

Here’s a couple more stills from the ‘Slender, Sad & Sentimental’ set, I love that sky & her beaming smile. She’s not acting, this was a hilarious shoot on a scorchingly hot day. Good times.

For all you technical folks, let me answer the FAQs…

I shot most of this video on a Canon 5D mkiii at 1080p / 24fps. I used a 24mm 1.4ii L lens for most of it. I think. I had my 85mm 1.2 L but I don’t think any footage from that made it in. The close ups from the dancing scene and the DJ footage is all iPhone XS matched at 1080p / 24fps. That garish pink light was what happened when a spinning disco light hit the lens just so. The iPhone is great at things like that, but the outdoor shot of the tree, for example, is pure Canon.

And here’s a still from the edit, putting things together in Premiere Pro.

Now, the song & video have been out for a day and folks seem to like it, which is very gratifying.

Visit http://www.josienneclarke.com for more of this, and don’t forget, preorder the album here.

Also, do get yourself a ticket to the Bush Hall London album launch party on November 19th. Josienne will be playing with a full band and believe me, you do not want to miss this rare show. It’ll be beautiful. Come say hello, tickets are here: https://www.ticketweb.uk/event/josienne-clarke-album-bush-hall-tickets/9714885

Thanks for reading, I hope you like what we made, tell your friends!